How should Idaho select its judges? The drafters of the state Constitution held robust debates on this question. Their choices still define Idaho’s modern system, which throughout its growth and change still displays the principles of this state’s founding fathers.

Idaho’s judges are elected by the people, from the highest Supreme Court justice to the magistrate judges who see almost every court case begin. Through the power of the ballot, voters have an active voice in choosing who resolves their legal disputes.

But our system also recognizes the need to fill vacancies outside of election years and maintain the work of the courts, which can’t just be put on hold. The framers of our Constitution anticipated this need and tasked the Legislature with developing laws to address it. The result is an open and deliberate system that carefully scrutinizes potential appointees, continuing the high standards of Idaho’s courts.

All of the processes described on this page were created by the framers of Idaho’s Constitution or in state statute by the Legislature. At the bottom of this page is a list of references to relevant constitutional articles and Idaho Code sections.

Who can be a judge? Idaho law requires justices and judges to be:

Judges and justices are among the nonpartisan races on your ballot. This means they do not run under the banner of any political party. During a primary, any voter can participate in these elections regardless of party affiliation.

Like other elected jobs, multiple people can compete for election to one judicial position. (The exceptions are magistrate judges, as explained below.) Each candidate for judicial office manages their own campaign with their race overseen by county election offices and the Idaho secretary of state. While the Idaho Supreme Court manages the state’s court system, neither it nor its administrative office have any part in judicial elections.

Besides Idaho’s general campaigning and ethics laws, all candidates for judicial office must follow the Idaho Code of Judicial Conduct.

Candidates don’t know who might eventually bring a case into their courtroom. But they do know those future parties will want to be judged fairly — no one involved in a lawsuit will want to hear ahead of time how the candidate would rule. The Code of Judicial Conduct requires all candidates, incumbent or newcomer, to be careful about their statements and associations while campaigning. Judicial candidates aren’t even allowed to know who donates to their campaigns.

Magistrate judges participate in a unique type of election: Each stands for retention, meaning voters simply decide whether to keep a specific judge. There are no contested elections with multiple candidates for magistrate judge positions.

Why do this? A retention election retains the public’s voice while allowing magistrate judges — who handle the largest number and widest range of cases — to run on their records of service.

The appointment process is only for filling an empty judicial seat outside of an election. If an appointed judge wants to keep their seat, they will always need the voters’ approval to do so.

For vacancies occurring during a term of office for a Supreme Court justice or a Court of Appeals or district judge:

The governor appoints a new judge or justice from a list of candidates vetted by the Idaho Judicial Council, created in statute as a separate government body from the court system. The seven-person council includes members appointed by the Idaho State Bar and the governor, all subject to approval by the Idaho Senate. It is led by the chief justice of the Idaho Supreme Court.

The Judicial Council interviews applicants for the position, then selects between two and four names to submit to the governor. The public also plays a role! You can provide written comment on candidates and watch their interviews, conducted in a public session.

A new Supreme Court justice or Court of Appeals judge serves what’s left of their predecessor’s six-year term in office, then stands for election.

For vacancies involving a magistrate judge:

A similar process occurs. But in this case, it’s managed by one of Idaho’s district magistrate commissions. Compared to the Judicial Council, these:

A new magistrate judge first serves an 18-month probationary period during which their commission can remove them without cause. Their first election is then the first November general election after that period ends. 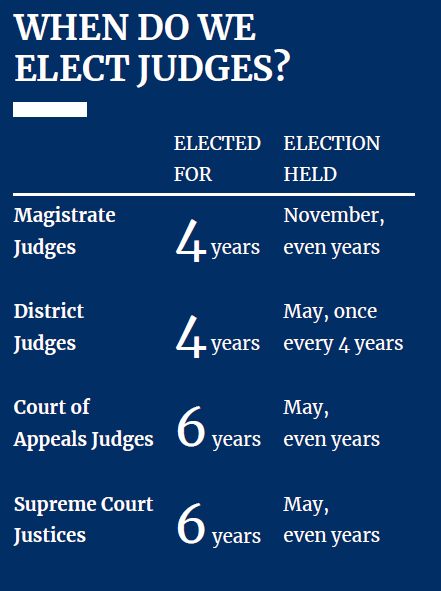